Listening and watching along with Harry

I wrote the other day about the new Harry Potter read-along on WizardingWorld.com. Today I listened and watch along for 28 minutes about The Boy Who Lived, read by Daniel Radcliffe.
Before I did the #HarryPotterAtHome thing as it's being tagged on social media, I looked back at the post I wrote about Chapter 1 of "Harry Potter and the Sorcerer's Stone." I got so caught up in the cat thing, because of my feline phobia, that I missed all sorts of important things in my introduction to Harry Potter. Things that I now realize are important as I have progressed through the opening chapters of "Deathly Hallows."
I started jotting things down as I listened to the perfect British voice of Harry:
The Chapter 2 reading is live. "The Vanishing Glass" reading is by Noma Dumezweni. She portrayed Hermione in the original cast of "The Cursed Child" in London and on Broadway.
On the Wizarding World website you can sign up for alerts and such. I figured I would sign up so I will know when a new chapter reading is posted. During the signup process, the Sorting Hat appeared and there were a series of questions designed to put you in a house.
I paused.
Do I really want to do this?
Might as well.
I came out a Hufflepuff.
Nerdiest thing I've ever done. 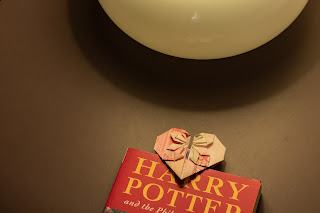 Photo by Mitchell Luo on Unsplash
Posted by Jeff Gilbert at 6:04 PM